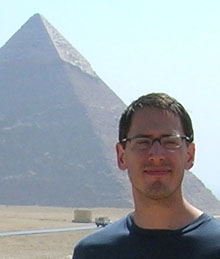 I am a theoretical astrophysicist specializing in the large-scale structure of the universe and models of galaxy bias. I use measurements of galaxy clustering from surveys such as the Sloan Digital Sky Survey, Two-Degree Field Galaxy Redshift Survey, and Deep Extragalactic Evolutionary Probe to connect the distribution of galaxies to the dark matter that lies underneath. Galaxy bias can either be thought of as a nuisance parameter to navigate when trying to constrain cosmological parameters from clustering measurements, or it can be used as a tool to gain insight on the formation of evolution of galaxies themselves.

My research attempts to meet both goals. I was a graduate student at Ohio State University (2000-2005), where I worked with David Weinberg on developing a theoretical framework for using upcoming galaxy clustering measurements to constrain cosmology. After finishing at Ohio State, I moved on to the Kavli Institute for Cosmological Physics at the University of Chicago, where I worked with Andrey Kravtsov.

At Chicago I extended my research into numerical simulations of cosmic structure and the properties of dark matter halos realized in such simulations. I am currently developing a model for quasar absorption lines, such as MgII or Lyman-limit systems, that encompasses such objects into our framework of large scale structure. This will put both condensed baryonic objects (ie, galaxies) and extended gaseous halos (ie, the material from which galaxies form) within the same theoretical model, providing insight into the formation mechanisms of galactic structure.