The most conclusive evidence for The Big Bang is the isotropic radiation that permeates the entire universe - the Cosmic Microwave Background (CMB). It was first predicted by Ralph Alpher, Robert Herman, and George Gamow in 1948 while working on Big Bang Nucleosynthesis.

In 1964, Arno Penzias and Robert Wilson were attempting to distinguish and measure sources of noise in a radio receiver they built at Bell Labs. They found that a persistent signal occurred regardless of the antenna's direction. At nearby Princeton University, researchers Robert Dicke and Dave Wilkinson were designing an experiment to find the CMB. When they heard about Penzias and Wilson's work, they knew the CMB was the source of the excess noise - the relic radiation of the Big Bang. Penzias and Wilson received the Nobel Prize for their discovery in 1978.

The above image is a Wilkinson Microwave Anisotropy Probe (WMAP) map of the CMB. WMAP is a NASA Explorer mission that launched June 2001 to make fundamental measurements of cosmology. Although the temperature of the CMB is almost completely uniform at 2.7 K, the map shows there are tiny variations, or anisotropies, in the temperature on the order of 10 -5 K. The anisotropies appear on the map as cooler blue and warmer red patches.These anisotropies, or "ripples" in the temperature map, correspond to areas of various density fluctuations in the early universe. Eventually, gravity would draw these fluctuations into even denser areas. After billions of years and gravitational attraction, these minute ripples in the early universe evolved into the planets, stars, galaxies, and clusters of galaxies that we see today.

Studying the CMB reveals conditions of the early universe. Experiments include: 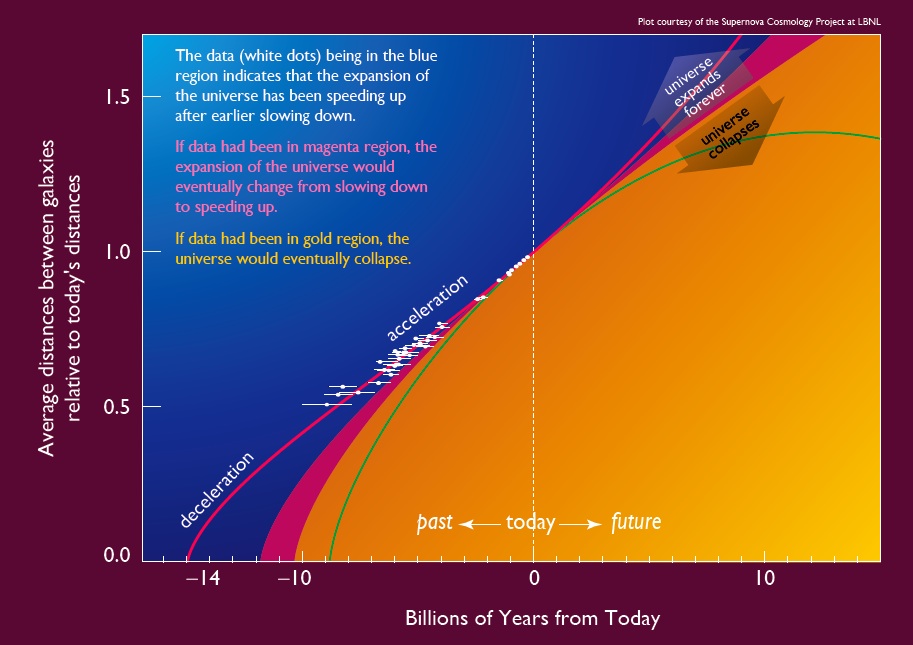 Dark energy is the name given to the unknown physics causing the current acceleration of the cosmic expansion. Whether dark energy is truly a new component of energy density or an extension of gravitational physics beyond general relativity is not yet known.

The consequences of dark energy for fundamental physics will not be clear until its origin is discovered, but the effects on the universe are dramatic. Dark energy effectively contributes 70-75% of the current energy density of the universe, governing the expansion of space, causing it to accelerate over the last ~5 billion years, and will determine the fate of the universe. Such a phenomenon is not predicted within the standard model of particle physics nor within experimental experience of gravity as an attractive force.

BCCP explores dark energy from many directions, including theory, computer simulations, and diverse experimental projects. We look at the ties to high energy physics, quantum physics, and gravity and investigate its signatures on supernova distances and cosmic structure over the history of the universe.

We believe that most of the matter in the universe is dark - it cannot be detected from the light which it emits (or fails to emit). Its presence is inferred indirectly from the motions of astronomical objects - specifically stellar, galactic, and galaxy cluster/supercluster observations. Dark matter has measurable effects on the anisotropies observed in the cosmic microwave background and plays a central role in the modeling of structure formation and galaxy evolution (shown in this NASA ESA image).

We have four lines of evidence for dark matter in cosmology: the formation of large scale structure in the length of time since decoupling requires it; the limits on the baryon density from primordial nucleosynthesis requires it; the velocities of stars within galaxies and of galaxies with clusters require it; leading theories of particle physics predict it. The cosmological effects of dark matter on cosmic structure provide one of the best windows on this physics beyond the Standard Model of particle physics.

Dark matter was postulated by Fritz Zwicky in 1934, to account for evidence of "missing mass" in the orbital velocities of galaxies in clusters. According to new supernova observations and Big Bang cosmology, dark matter accounts for 23 percent of the total mass-energy of the observable universe. Dark matter comprises about 6 times more matter than ordinary baryons do.

Theoretical cosmology involves analysis of data with an eye to current theories, making predictions from theories and coming up with theories. It includes a wide range of topics, from dark energy, inflation, dark matter and neutrino masses to galaxy and cluster formation, reionization and structure formation (e.g. characterization of emergent phenomena such as the cosmic web or the regularities observed in galaxy properties). For many of the physical cosmology problems, numerical simulation in particular is extremely useful, and in fact crucial, for incorporating correlations implicit in the cosmic web and providing a framework for evolution within it. A flood of observational data has become available in recent years, and is growing steadily. Currently, in many parts of physical cosmology, theory is racing to keep up and to make testable predictions for observations, as the latter grow in precision and richness.

Galaxy & Extremely Distant Object Observations map the baryonic or "regular matter" in the universe, giving us an incomplete description and missing the majority of stuff in it - including dark matter and dark energy. However, combining our models and indirect measurements of dark matter and energy with precise surveys, systematically mapping galaxies in the universe is the most powerful cosmological tool available.

The Far-Infrared background (Far IR) measurements improve our understanding of the structure of the universe and the galaxy population mix at a distance of about 7-11 billion light years. Far IR also reveals the evolution of dusty starburst galaxies, and the measurement of the 'bias' - the ratio of baryonic to total matter in the universe.

The Big BOSS project aims to measure the distribution of baryonic matter in bright galaxies and quasars over the entire sky out to a distance of nearly 14 billion light years. Such exquisitely precise baryonic mapping will permit a huge leap in our understanding of dark energy. Baryonic mapping provides an improved measurement of the equation of state of the universe in addition to numerous other improved cosmological measurements - even an improved measurement of neutrino masses. Big BOSS measures the appearance of an cosmic "standard ruler", the acoustic oscillations in the early universe. See the full explanation here.

BCCP scientists are involved in a project to measure very early optical light from gamma-ray bursts, the Ultra-Fast Flash Observatory. Gamma-ray bursts give us a view of some of the most distant objects known, so far up to 18 billion light years away. These objects may turn out to be a type of "calibratable" standard candle, in which case they would give us the best picture of our universe at extreme distances.