BCCP and the Instituto Avanzado de Cosmologia Mexico held the 5th annual Essential Cosmology for the Next Generation Meeting January 13-17, 2014, popularly known as Cosmology on the Beach. The conference blends a winter school of lecture courses by world-leading scholars with plenary talks on hot research topics. This year, topics included CMB polarization, gravitational wave cosmology, particle physics, tests of gravity, and statistical and experimental methods. For slides from the BCCP/IAC meeting Essential Cosmology for the Next Generation 2014 workshop, click here. They are also available on the Presentations Page. 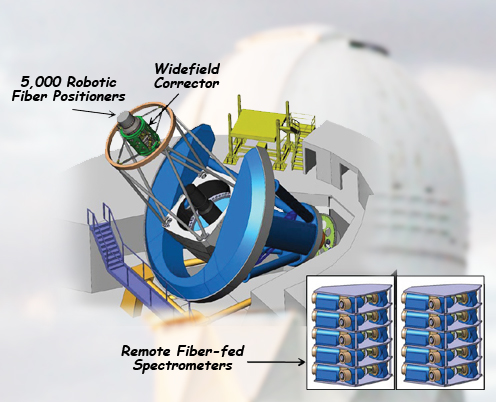 A $2.1 million grant from the Gordon and Betty Moore Foundation to the University of California at Berkeley, through the Berkeley Center for Cosmological Physics (BCCP), will fund the development of revolutionary technologies for BigBOSS, a project now in the proposal stage designed to study dark energy with unprecedented precision. BigBOSS is based at the U.S. Department of Energy’s Lawrence Berkeley National Laboratory (Berkeley Lab).

“BigBOSS is the next big thing in cosmology,” says Uroš Seljak, Director of the BCCP, who is a professor of physics and astronomy at UC Berkeley and a member of Berkeley Lab’s Physics Division. “It would map millions and millions of galaxies, allowing us to measure dark energy to high precision – and would yield other important scientific results as well, including determining neutrino mass and the number of neutrino families.”

Dark energy is the unknown something that appears to account for almost three-quarters of the mass-energy of the universe and is the cause of its accelerating expansion. The discovery of the accelerating universe, announced in 1998 by two teams, resulted in the 2011 Nobel Prize in Physics, divided between Berkeley Lab and UC Berkeley astrophysicist Saul Perlmutter, leader of the Supernova Cosmology Project, and Brian Schmidt and Adam Riess of the competing High‑z Supernova Search team. “After we won the Nobel Prize, the question we all heard most was, ‘Now that you’ve discovered dark energy, what comes next?’” says Perlmutter, who is the Executive Director of the BCCP as well as principal investigator for the Moore Foundation’s BigBOSS grant. “The answer is pretty clear: we have to find out what dark energy is. There’s no end of theories. To know which are possible, what we need most is the kind of accurate observational evidence that only BigBOSS and other advanced experiments can give us.”

New data from the South Pole Telescope indicates that the birth of the first massive galaxies that lit up the early universe was an explosive event, happening faster and ending sooner than suspected.

Extremely bright, active galaxies formed and fully illuminated the universe by the time it was 750 million years old, or about 13 billion years ago, according to Oliver Zahn, a postdoctoral fellow at the Berkeley Center for Cosmological Physics (BCCP) at the University of California, Berkeley, who led the data analysis.

In this video, Berkeley Lab astrophysicists and Nobel laureates, George Smoot and Saul Perlmutter -- joined by Berkeley Lab physicist Eric Linder and UC anthropologist Gerardo Aldana -- explore the cultural and scientific connections between Mayan astronomers and modern cosmologists as they look to the skies for answers to how the universe evolved, how it might end, and our place in it. The fundamental human curiosity about our origins and fate, a quest that persists across time and cultures, has been enriched by recent discoveries about dark energy, the Big Bang, and the accelerating universe. New knowledge has only increased our sense of wonder about the cosmos and deepened our appreciation for what the Mayans achieved using only the naked eye.